Promotional Free Goods Must Be Entered In “Order Notes” Upon Checkout

GC Initial LiSi Press is a revolutionary new pressable ceramic. It combines unparalleled strength and exceptional aesthetics. Best of all, the ingots are faster to process, its optimized to be used with LiSi veneering ceramic, and leaves virtually no reaction layer making your laboratory more productive.

In a measure of biaxial strength of several different pressed ceramics, the Initial LiSi Press came out on top with a strength of 474MPa. That is a full 7% greater than the next leading competitor.

Resistance to wear is of paramount importance to the lab, the dentist, and the patient. Even after 400,000 slides, under 300gf loads, the abrasion depth of the material and of the HAp both showed low wear at 10μm and 20μm respectively. These figures dominate the leading competitor, who came in at both material and HAp abrasion depths of well over 25μm. 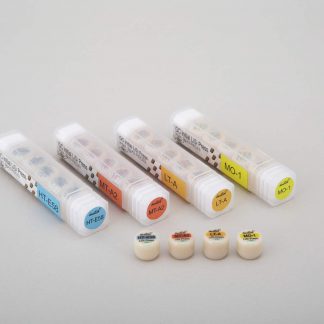